【观点】Eating Meat is not a sin. Plant-based diets have limited effects in mitigating climate change

" Every time someone in China eats a piece of meat, a little puff of smoke goes up in the Amazon." This is quoted from the CEO of iImpossible fFoods, framing Chinese for "exacerbating climate change". Regardless of the hint of arrogance, this accusation makes the Chinese people who have gone through hard work to finally make meat eatenaffordable, meat quite dissatisfied.
As a result, it has triggered waves of condemnation of vegetarianism on the Internet, saying that the West is uncomfortable with the well-being of the Chinese being alive and well, or that this is a conspiracy for plant meat factories to make greater profits.
It is meaningless to speculate the motive. What we need to understand is: Can plant-based diets, or vegetarianism, bring the benefits they claim to have in dealing with climate change?

Vegetarians choose this way of lifestyle for many reasons. The main reason is animal welfare and environmental friendliness.
They believe that intensive factory animal husbandry has brought a lot of suffering to animals.
The main argument is: you will not smash a cute dog yourself, so cows, sheep, dogs, and pigs should not be treated enjoy the same treatment.
The author believes that there is a big difference between companion animals and animal husbandry animals, so I will not no further discussion more herehere.
However, the factory-basedindustrial animal husbandry does bring about the problem of antibiotic abuse, and animal welfare isshould indeedbecome an issue of consideration a part of the scope that we need to consider in food production.

In terms of
environmental friendliness, the manifestation of vegetarianism is more obviousoblivious.
Direct impacts include environmental pollution caused by animal husbandry (such as pollution of rivers and soil by glyphosate and fertilizers) and the impact of ffisheryishing on marine ecosystems.
According to estimates by the Food and Agriculture Organization of the United Nations (FAO), the livestock industry’s greenhouse gas emissions account for about 18% of the world’s total emissions, which is a huge carbon emission system.
Fertilizers, pesticides and gastrointestinal fermentation of farm animals are huge.
But , while the indirect impact of animal husbandry on climate change seems to be more concerning.
Statistics show that the production of meat and dairy products has taken up 30% of the earth’s land and 70% of agricultural land.
At present, 80% of legume crops have entered the mouth of animals and become atheir source of protein in feed.
Therefore, if the production of meat products is reduced, theoretically, methane emissions can be reduced to alleviate the climate crisis, and the current rate of forest destruction canwould also slow down.

But is it really that simple?
Let's zoom back to the smoky Amazon rainforest and see what is happening in this landthere. Is meat the culprit here?

According to a Global Wintess research, stopping the conversion of rain forests into beef pastures can reduce Brazil’s agricultural carbon emissions by 69%[1]
.
The main reasonlogic behind this is that the beef companies have turned a blind eye to pastures not being restored adequatelythat have are inadequate to restoration.
After a few years of use, the pastures arewill be abandoned due to degradation, and the ranchers will again cut down new woodland for more pastures.
This is outrageous but profitable.
Researchers estimate that if 12 million hectares of degraded pastures in the Amazon area are restored, 17.7 million cattle can be producedsupported by these restored pastures each year, and the demand for new pasture land will also be reduced.[2]
.
What's more, in the cultivation of forage crops, there areis still aboriginal slash-and-burn cultivation, which has further increased the deforestation of forests.[3]
.
Therefore, if we want to prevent further forest degradation and deforestation, the first thing we need to do is to allow local people to adopt crop rotation and sustainable agriculture instead of reducing meat outputproduction. 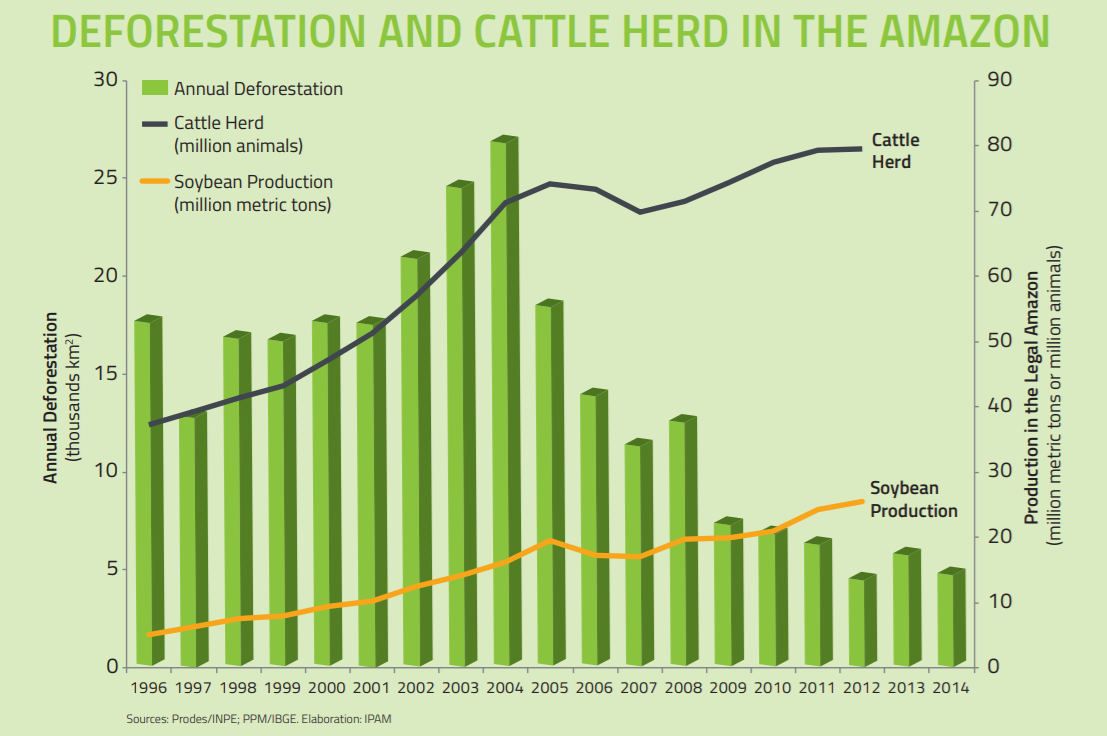 From 2004 to 2012, the Brazilian authorities strengthened environmental supervisiongovernance and rewarded communities in the Amazon basin tofor finding alternative income-generating methods without having to instead of reclaiming rainforests. This quickly reversed the curve for the destruction of the Amazon rainforest. At the same time, the livestock industry has also improved year by year.[4]

This shows that
deforestation does not have to do withbe related to the development of animal husbandry.
At this time, saying "eat less meat" can reduce the impact of animal husbandry on the climate is undoubtedly ignoring the main factor and catching the minor ones.

Brazil presents a typical case of how animal husbandry and agriculture affect the environment around the world. is a reflection on the impact husbandry and agriculture have around the world.
There are two main types of emissions concerning meat: methane and land changes caused by the cultivation of forage crops.
In the food system, land change (ie deforestation and degradation, etc.) accounts for 38% of the influencing factors of climate change, while methane emissions account for 35%[5]
..
(2021, FAO) Let's start with the latter one.

Under current discussion on climate change, methane and other non-carbon dioxide gases are topics of increasing concern.
However, neither the methane emission reduction roadmap of China nor the United States mentions methane emissions from the livestock industry.[6]

The reason may be that compared with the methane emitted by fossil fuels[7]
,the methane from animal husbandry itself is part of the carbon cycle.
After the forages eaten by cattle are fermented in the rumen, it is decomposed into water and carbon dioxide in about 10-20 years, which are re-absorbed by the forages for photosynthesis to complete the carbon cycle. This process does not generate additional carbon emissions.
The methane in the fuel industry releases stored carbon, which areis a more urgent issue to be addressed.

However, the use of chemical fertilizers and the cultivation of feed crops all release carbon. The transportation of feed, dairy cow breeding, cattle manure treatment, and even product transportation (although only accounting for 2.6% of animal husbandry production’s emissions) all produce carbon dioxide.
This means that we cannot take this lightly. We must reduce related carbon emissions through nutritional regulation, adding feed additives that inhibit methane release, and improving the management of pastures.
The author believes that the popular " Cow Republic" concept (that is, the total carbon emissions of 300 million cows in the world are second only to China and the United States, which is about 5 billion tons), yet the solution lays in green innovation. It would be for the best if we can reduce emissions without damaging the scale of animal husbandry, while ensuring food security and economic development.

Regarding the land changes, vegetarians believe that if the current arable land for fodder crops is freed, not only can we reduce our deforestation, but also open up the space for forests.
Take the main feed source of cattle: soybeans as an example.
Currently, the soybean planting area exceeds 1.8 billion mu (120 million hectares), ranking fourth in terms of crop planting area.[8]
According to statistics, about 80% of soybean products end up in the stomach of animals.
Vegetarians said that such energy conversion efficiency is very low, and humans should directly consume these proteins, eliminating the need for animals.[9]
On the other side,Relatively, researchers in the meat industry also believe that 65% of the world’s arable land is marginal arable land (50% in China), because of the terrain and other reasons, it is only suitable for grazing or growing forage crops., T and herefore the animals are not competing with human for protein, and theyhave not invaded it. Our protein, on the contrary, is improving our overall energy conversion efficiency on the contrary.
Grazing cattle can improve the environment, but if only relying on grazing, the number of cattle herd can only be maintained at 13%; if it is carried out in free-range, because there are other activities besides meat growth, the conversion efficiency is not high when ensuring animal welfare. …This kind of debate is the topic for another day.

However, the author believes that the problem is not whether animals occupy our precious arable land.
The total amount of food is enough for people all over the world to have a nutritious diet[10]
, but food wastage and uneven distribution led to raging famine[11]
.
This is not a problem of fodder crops occupying too much land, but a problem of " suffering from capitalism and unevenness".
Therefore, the hypothesis that the elimination of the animallivestock industry and the increase of arable land can feed all mankind is too idealistic.

Taking a step back, even if we can accept that all the meat on the table canshould be replaced by soy products, will the extra land help to achieve carbon neutrality?
According to a joint report by the IUCN and the UNEP, nature-based solutions can provide some carbon sequestration, but if we maintain current fossil fuel emissions, even if the world is fully covered by of forests, we can only get a ten-year respite.[12]

Therefore, it is the most direct means when it comes to mitigating climate change is reducing deforestation and increasing green innovation investment in animal husbandry.

There is still a long chain between not eating meat and reducing carbon emissions.
Regardless, we should choose a sustainable diet, rather than simply choosing between meat orand vegetarian food.
Changing the way of lifelifestyle is only the first step we take to save the world.
After reducing personal carbon footprint, the public also needs to tell the market and the government: We care about climate change.
Only in this way can the decision-making end use the environment in exchange for benefits and enable the companiesy to achieve sustainable development goals.

[12]Zhang Daqian: The world is full of trees, and we cannot achieve carbon neutrality https://mp.weixin.qq.com/s/-yB7AcgSAyV3US12tFN4JQ)